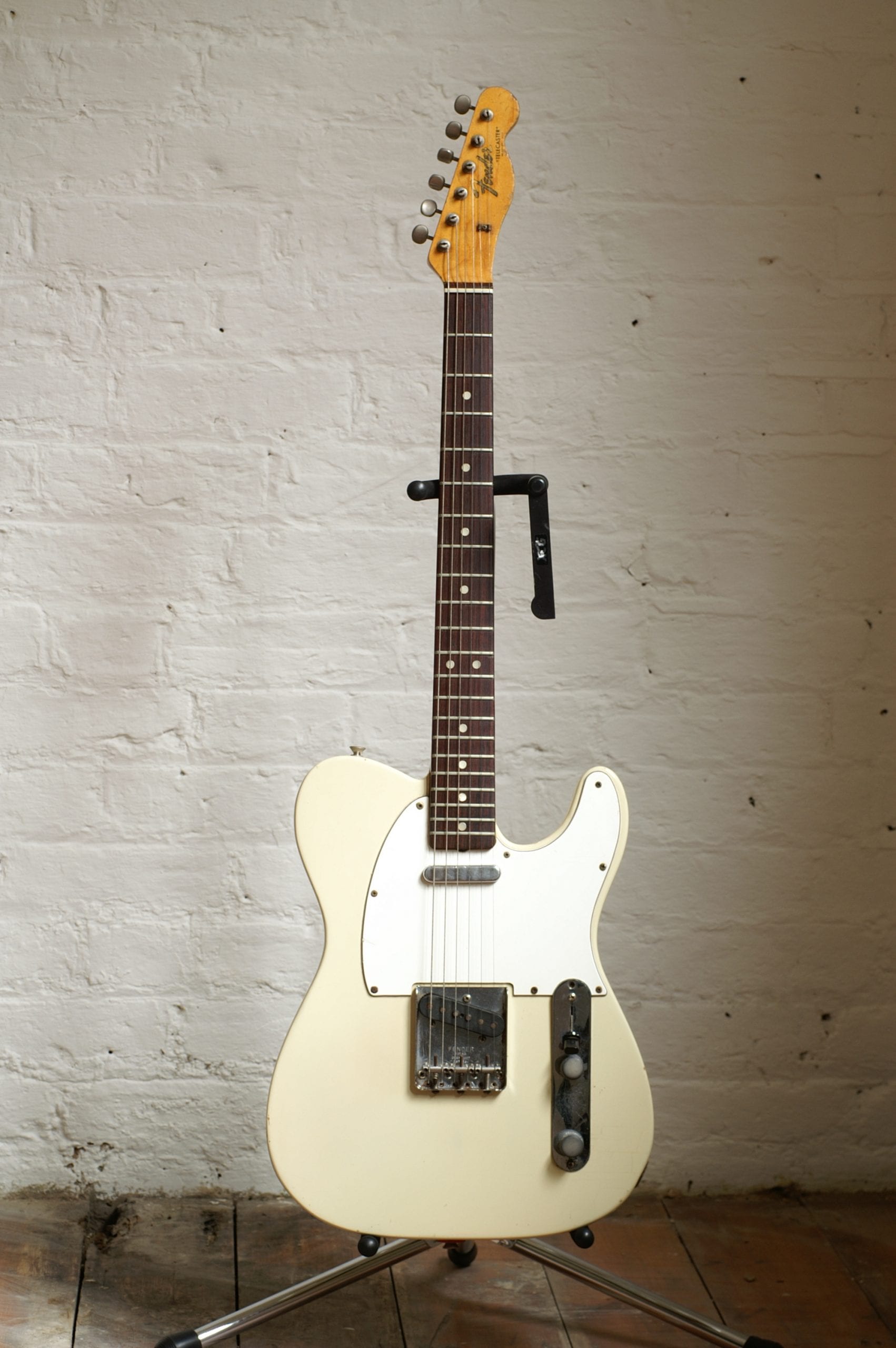 Rory was first seen playing this guitar (in this white colour) during a gig in Copenhagen, Denmark in early to mid-1970.

The next time Rory appears with this guitar is the Isle of Wight concert in August 1970.

At that point, the guitar featured white finish, although Rory was quoted saying that the finish wasn’t original.

A white ‘63 Telecaster. The lead pickup was rewound. It was repainted; I stripped it down to its natural wood, and then I tried to get the natural creme finish that I could get, but it turned out kind of white. I used that with Taste as well. It’s a very good Tele. [The Wearing of the Blues, Guitar for the practicing musician, August 1991]

Rory pictured playing the stripped down version of the Telecaster in 1969 at Mothers in Birmingham.

A question arises as to what prompted Rory to repaint it in the first place. Since the guitar was relatively new when he acquired it, it is unlikely that it had any wear on the body. Of course, there is a possibility that Rory bought the guitar that was damaged in some way that required a new paint job to restore it.

The first modification that Rory did to this guitar was the replacement of the original threaded steel saddles with steel grooved ones (the steel grooved saddles were a new innovation for the 1968/69 season, [A.R. Duchossoir, The Fender Telecaster, p. 67]). Unfortunately, due to lack of any photos from around the period, we couldn’t pin-point when exactly the mod took place. If we’re to guess, since Rory did the same exact mod on his Esquire in early March 1972 (read more on it in the Esquire section), it is likely that the Telecaster mod was done around the same time.

From this date and up until around 1974, the guitar seems to have remained unchanged. The next mod that Rory did to the guitar was in spring of 1974, and it involved removing the cover of the neck pickup. The guitar was first seen in this condition on the footage of Don Kirshner’s Rock Concert dating to August 5th, 1974.

It appears though that by 1975 the guitar was reverted back to it’s previous condition [Rory Gallagher with the Telecaster, 1975], as the mod probably didn’t produce the desired results. Rory stated on couple of occasions [Rory Gallager on rhythm pickup on Teles] that he thought that the neck pickup in the Telecaster wasn’t particularly strong, so the removal of the metal cover was likely done to see if that would help boost the sound somewhat. The same mod was applied to his Esquire, as mentioned in the section dedicated to that guitar.

Unfortunately, from 1975 up until early 1979 Rory seemed to have used his Esquire more often that the Telecaster as his main slide guitar, which leaves us with a very few photos and videos of the guitar from that period to inspect.

The next time Rory appears with this guitar to our knowledge is the May 6th, 1979, or the evening before the legendary Rockpalast Concert played in Wiesbaden, Germany [May Festival Wiesbaden 1979]. The Telecaster seemed to have gone through some major changes. The neck pickup is now completely gone, and what looks like a Bill Lawrence L-220 or L-250 took it’s place. Next to that, another Bill Lawrence pickup was added to the middle position, essentially converting the guitar to a three-pickup Tele.

There are couple of photos of decent quality taken at a later date, showing the mentioned mods in much greater detail. They were taken on August 22nd, 1980, which is of course when Rory played at the Reading Rock Festival [Rory Gallagher, August 22nd, 1970 – By: Peter Still]. Looking at these, you’ll notice that the toggle switch on the Tele is actually in the treble position, meaning that only the bridge pickup is in the use, while the two custom pickups are sitting idle. Also, the guitar is not used for slide, which leaves us thinking towards what purpose did Rory plan to use this guitar.

From that date on, the guitar seems to have been retired as a stage instrument, as Rory begins using couple of different guitars. Most notably, the Gretsch Corvette which he used as his main slide guitar from around 1979, and a Fender Lead II which he was seen using during the 1983 European tour.

Around 1987 Rory reverted the Telecaster back to the way it was. The same was done on his Esquire, which was

I’m a Strat player because of the three pickups, the out of phase thing, as well – even on my Stratocaster I’ve neutered the middle tone control. I think probably the ideal guitar would be like a Telecaster lead pickup on a Stratocaster body[…] I turned against the rhythm pickup on Teles, years ago, and I put two Strat pickups in the middle and rhythm position, but then lately I’ve reverted back to the way they were. [Guitarist, June 1987, Rory ! by Neville Marten]

At this point Rory also removed the copper plate underneath the lead (bridge) pickup in order to fix the “squealing problem” as he called it.

The lead one is always the difficult one. What I do with that one, or should I say what Chris Eccleshall does with that one, is just take the brass plate from underneath the pickup and throw it away. He re-earths it somewhere else and that cures it. Plus, you have to put the petroleum wax in. [Guitarist, June 1987, Rory ! by Neville Marten]

Thanks to Dan at Ground Guitar for details – https://www.groundguitar.com/rory-gallagher-gear/