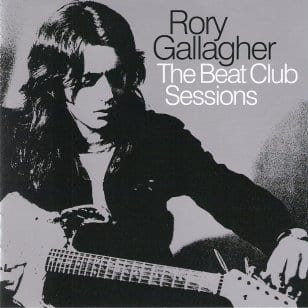 Beat-Club was a German music programme that ran from September 1965 to December 1972. It was broadcast from Bremen, Germany and is notable for being the first German show to be based around popular music, and featured artists like The Rolling Stones, Led Zeppelin, Jimi Hendrix, Tina Turner, The Who, Black Sabbath, The Bee Gees, The Beach Boys and Kraftwerk in its seven-year run. Rory Gallagher was one of the shows most frequent visitors performing four times in the space of just over two years. Rory’s first appearance on the programme was with his band ‘Taste’ in 1970 and he returned soon after with his own solo work. This CD features 12 classic versions of Rorys early solo material from three separate performances during 1971-72, the 1972 recording being a full Beat Club special on Rory.