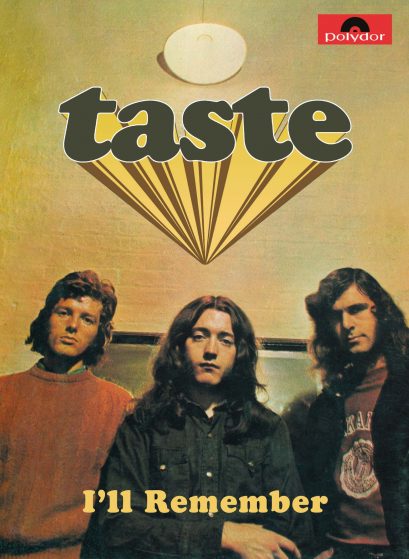 “I’ll Remember” is an extensive four-disc boxset from Rory Gallagher’s band, Taste. Over half of the tracks are officially unreleased material, including live recordings and demos, as well as remastered versions of their two studio albums “Taste” and “On The Boards”. Released on 28th August on Polydor through Universal Music Catalogue.

Taste were one of the world’s most formidable live bands in the late 1960’s / early 70’s. Fronted by one of the the most iconic and influential guitarist of all time, Rory Gallagher, “I’ll Remember” captures the essence of the band from their incredible studio recordings through to their mind-blowing live performances.

Disc One – “Taste”
“Taste” was their debut album and originally released in April 1969. This fully remastered version comes with six previously unreleased bonus tracks of alternate studio recordings of songs from the album.

Disc Three – Live in Stockholm and London
Consisting of 13 live tracks, this is the first official release of two performances from 1970. Tracks 1 – 8, “Live at Konserthuset”, were recorded in Stockholm and include two numbers previously unavailable on any other official Taste album “At The Bottom” and “Nineteen Year Old”. Tracks 9 – 13, “BBC Live in Concert”, were recorded at the Paris Theatre in London for John Peels’ live Top Gear sessions.

Disc Four – “Belfast Sessions and Demos” and “Live At Woburn Abbey Festival”
Their first official release, disc four is a collection of demo recordings made in July 1967 at Belfast’s Maritime Hotel, in the hope of securing the record deal with Irish label Major Minor Records. “Live At Woburn Abbey Festival” was recorded in 1968, and was Taste’s first British festival appearance and shared the line-up with Hendrix, Donovan and John Mayall’s Bluesbreakers and was one of the final appearances for the original Taste lineup.