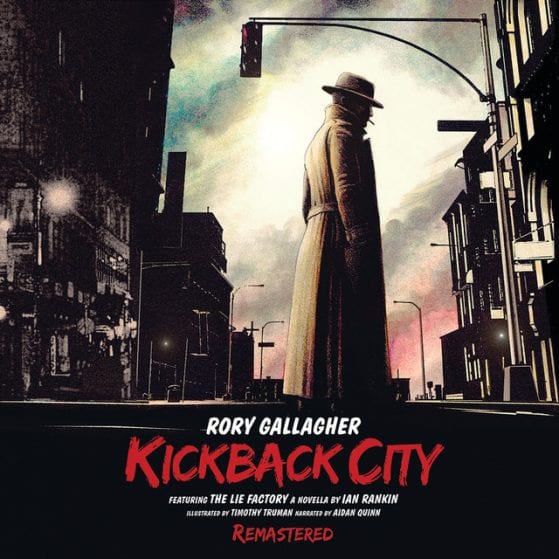 Inspired by Rory Gallagher’s passion for crime novels, ‘Kickback City’ is a creative collaboration combining the words of Ian Rankin, the illustrations of Timothy Truman and of course the music of Rory Gallagher. The result is a brand new kind of concept album – a must have for fans of Rory Gallagher, Ian Rankin, graphic novels and newcomers alike.

Kickback City will be packaged like a hardback book housing 3 audio discs, including an audio version of the book read by Hollywood Actor Aidan Quinn, the 44 page novella ‘The Lie Factory’ and four ‘crime scene’ postcards. As well and the crime inspired Rory Gallagher compilation album, the set also includes a collection of live ‘crime’ tracks (Kickback City Live) recorded at the Cork Opera House, never before available as an audio release.

“This could be weird. If this album ends up in Rebus’s record collection I could end up writing a story in which Rebus takes out this album and sits reading an Ian Rankin story whilst listening to a Rory Gallagher album!” – Ian Rankin