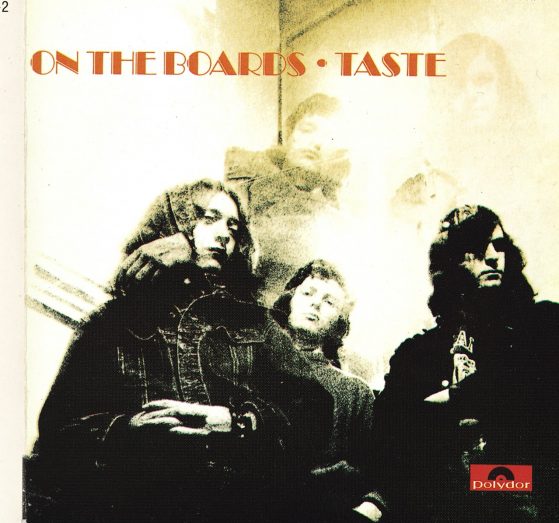 Taste’s second studio album, “On The Boards”, was released on New Year’s Day, 1970.  The cracking opener What’s Going On  with its agile stop-start riff, double-tracked guitars and infectious chorus became perhaps Taste’s best-known song. Railway and a Gun is an emphatic slice of blues purism. The swinging jazz-tinted psychedelia of  It’s Happened Before, It’II Happen Again  and the  album’s title track with a menacing Doors-like feel and featuring Gallagher on haunting saxophone, showcases the band’s new experimentalism. The pounding Morning Sun, the boogie-styled If I Don’t Sing I’ll Cry, the slide-drenched frenzy of Eat My Words and the crunching I’ll Remember represent different facets of classic late-60s British blues-rock at its finest, while the light, airy folk-pop of If the Day Was Any Longer and the bittersweet See Here present another side of Taste that draws more on rural Ireland than urban Chicago for its inspiration.

Reviews of “On The Boards” were consistently favourable. “Taste have matured; that is the basic difference between their debut album and this collection of Rory Gallagher songs,” Melody Maker reported. Lester Bangs in Rolling Stone was even more effusive: “The band is so tight and compelling, the songs so affecting, and the experiments and improvisations so clearly thought-out, that it seems a shame even to suggest that Taste be classed in any way with that great puddle of British blues bands. Everybody else is just wood shedding; Taste have arrived.”