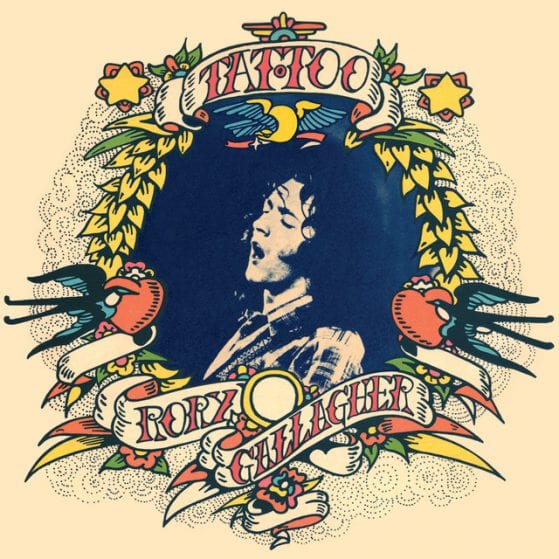 Having released his third studio album Blueprint in February 1973, Rory was in a prolific and confident mood and so quickly returned to the studio that summer. Retaining the Blueprint line-up of Gerry McAvoy, Lou Martin and Rod de’Ath, rehearsals for the album began at a rowing club in Cork city. This allowed Rory to develop the musical arrangements of his material at a leisurely, relaxed pace. Things went so well that Tattoo was recorded quickly and then released in November, barely 9 months after Blueprint – a feat that would be inconceivable today!

The fairground lifestyle had appealed to Rory since childhood and, on opening track Tattoo’d Lady, lyrically he draws parallels between the travelling entertainers and his own profession.

Born, with more than a touch of irony, at The Rock Hospital, Ballyshannon, Rory rocked literally all of his life. On Cradle Rock, this rockin’ R&B cut displays his exciting bottleneck style in full-flight.

20:20 Vision features Rory on acoustic and his fondness for the Davy Graham style.

Underscored with unison guitar and piano plus brilliant harmonics, They Don’t Make Them Like You Anymore conjures up a relaxed jazz feel. This title could now be said of Rory himself…

Written at a time when the band were increasing their touring activity in America, Livin’ Like A Trucker could have been a tour anthem. During his career Rory racked up over thirty long tours in the US.

On Sleep On A Clothes-Line, Gerry, Rod, Lou and Rory lock-in tight for this shades-of-Rory/Taste riff-based track.

With his acoustic dobro in slide mode, Rory’s intro to Who’s That Coming becomes electrified with both steel slides and the softer bottleneck, emphasizing the correlation between the styles of Southern (Delta) and Northern (Chicago) blues, layered over with funky clavinet playing.

A Million Miles Away quickly became one of the most-loved numbers in Rory’s repertoire. It demonstrates the deep, introverted side of his emotions.

The jackhammer-heavy riff of Admit It is the perfect vehicle for a Rory octavating, stinging solo – whilst Lou lays down some great piano on this rock number.

Vinyl time restrictions originally prevented Tucson Arizona, a Link Wray-penned track (who was, at that time, a Polydor stable-mate of Rory’s) from making the original album’s starting line-up. However, this colourful, laid-back country track featuring some captivating lap steel guitar was a must for this expanded version.