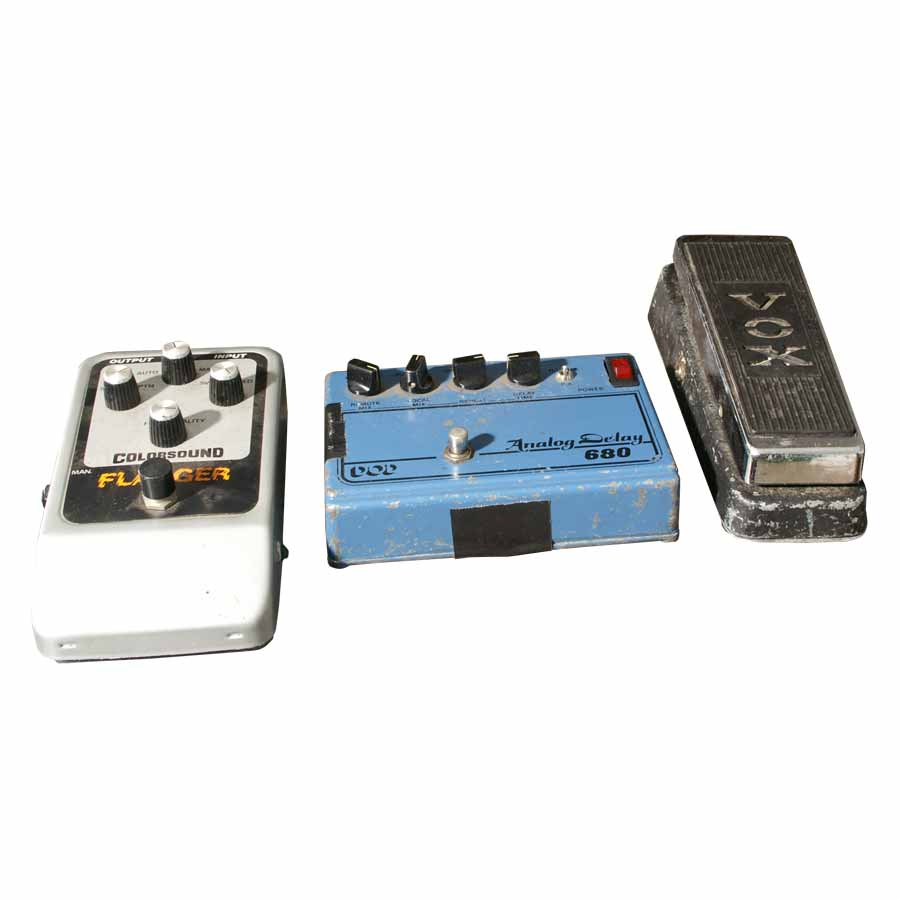 While Rory was known for being a guitar player who shunned onstage effects, over the years he amassed a large collection (several hundred) of effects and pedals. He would buy them to try out at home and in the studio. From the early 1980’s Rory began to use a few select pedals live.

“I don’t have anything against them, and I can admire players who use them, but I’ve got this thing that, given I use a treble booster on stage to give the amp more poke, otherwise I’m plugged more or less straight in and I’m into what you can do with your hands within that small range” November 1974  http://www.roryon.com/gadget250.html

“Well, there are a million and one pedals around, and I have a phase shifter I use once in a blue moon in the studio, but I think that’s been sort of overused. My favourite of all the gimmicks is the vibrato or tremolo—that old Bo Diddley sound. That’s fantastic with distortion, because it really plays tricks with the rhythm and it foxes the player. I like to overdrive the amp, as opposed to using a fuzz box. Better still, get a dirty Fender Champ and play the lead on that through a bigger amp. And I still prefer to get a wah-wah effect by working the guitar’s tone control manually.” March 1978  http://www.roryon.com/GP78.html

“I have a MXR phase 90 which I mess around with, on some of my records I have sometimes used the effect with accompaniment work. Furthermore, I have a wah-wah, but that I only monkey about a bit at home. It’s not bad, but on stage I don’t use it. The only other effect device I have is a Powerbooster.” June 1978  http://www.roryon.com/mm678-315.html

“I use them off and on!  I go through phases when I just use the Hawk Booster. At the moment I’m using some Boss units – a vibrato, flanger, octave divider and occasionally a distortion pack.  I also have a little DOD analogue delay between the two amps.  I don’t like rack units, I prefer the battery power – it makes less noise. One thing I do insist on is a studio quality noise gate, but as regards effects I try to get as much from the guitar and amp as possible.” February 1985  http://www.roryon.com/guit231.htm

“I’ve got a Dyna-comp, which is on all the time, to drive the songs from the leads. It’s not for effect. It’s a form of compression and I have it at a setting where the compression’s really low on it. I usually use a Tube Screamer, which broke down on me. Last night I was using a Boss overdrive. I use them for some solos, not all solos…I have a brown Boss octave thing.” August 1991  http://www.roryon.com/guitar91.html

Rory would use a touch of delay live in the 1980s onwards and also owned tape delays and a Binson Echorec which he’d use in the studio.

“Echo units are indispensable, however. I always have a small delay on one of my amps, like a Memory Man or a DOD, but if you want anything like that authentic Rock ‘n’ Roll sound, then you have to have tape echo. The Copicat is great for that.” May 1982  http://www.roryon.com/regalia311.html