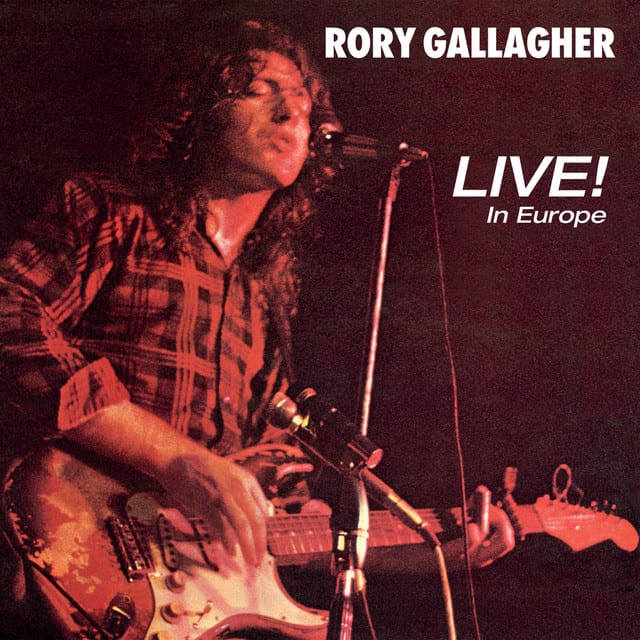 Rory Gallagher was the unsung member of the late 60’s British guitar god hierarchy including Eric Clapton, Jeff Beck, and Jimmy Page, but his profile has risen dramatically in the years since his untimely death in 1995. During his lifetime, the man stubbornly eschewed compromise for commercialism’s sake, refusing to allow singles to be pulled from his albums to attract a wider mainstream audience and avoiding the sort of slavish self-promotion that might well have brought him deserved worldwide success.

Nevertheless, Gallagher’s relentless integrity, combined with the furious immersion in his live performances, won him a staunch following. Working as a solo artist following the somewhat tumultuous dissolution of Taste, it took this iconoclastic musician no longer to document his concert work than when he was with the unsung British power trio: the now fifty-year-old Live in Europe album (released 5/14/72) was his third overall release under his own name after the eponymous debut LP and its sophomore follow-up Deuce. Rory avoided pandering to his audience. He preferred to simply play music and, in so doing with such unabashed abandon, he rendered it with an irrepressible glee that radiated from the stage to his enraptured audiences.

Whether in the acoustic realm of Blind Boy Fuller’s “Pistol Slapper Blues,” or in the electric attack a la “Messin’ With The Kid,” originally recorded by Junior Wells, there’s a primal passion in the performances of the guitarist and his accompanists, bassist Gerry McAvoy and drummer Wilgar Campbell:  all three stamp the musicianship with their respective personal style(s), while never relinquishing the precision-honed through regular road work.

Gallagher’s concert releases are among his best overall because they come closest to capturing the power at his command. The proud Irishman was rightly renowned for his live shows and the recordings of the same, and this is no exception, except insofar as it is one of the few albums in all his discography to feature traditional blues arrangements. Featuring only two previously-released recordings, one of which was his own “Laundromat,” it all constitutes a logical, deeply personalized extension of his absorption, then mastery of the blues form, a process comparable to that followed by the Rolling Stones (who actually asked him to join their group upon the departure of Mick Taylor in 1974).

Apart from differences in graphic image design and, more importantly, slightly brighter and less spacious sound on the second of two slightly expanded reissues, both of the near sixty-minute Live In Europe CDs are virtually identical, right down to Mick Rock’s lengthy essay. The late photographer waxes rhapsodic about the subject of so many iconic images he captured over the course of both his and Gallagher’s careers, yet the effusive prose is wholly warranted. It’s actually an accurate reflection of the action that took place on stage during the course of one of Rory’s concerts

The intensity isn’t all that much less during the acoustic arrangement of “Goin’ to My Hometown” than in comparison to the full-bore likes “I Could’ve Had Religion;” for this comparatively slower twelve-bar, the rhythm section plunges headlong into the flow of ideas the frontman generates on his electric guitar. There’s an inescapable sense all three continuously push themselves, not so much to maintain the increasingly forceful and frenetic momentum but to challenge themselves and each other as musicians.

The dramatic theater that emerges from this musicianship is hardly the contrived sort of mere crowd-pleasing, but that which arises from the natural stage presence of musicians fully and completely immersed in their playing. Likewise the rowdy but respectful crowd reaction: Rory Gallagher played with a raw, gutsy intensity that carried impact all the greater for the ever-so-slight but tangible restraint he employed, a touch that precluded any of the heavy-handed and blowzy self-indulgence that was the bane of British (and American) blues.

Gallagher’s display of versatility on guitars, including his slide work, on the “Hoodoo Man” among others, plus mandolin and harmonica for “What in the World,” is hardly lost on audiences fully engaged with what’s happening on the stage. Interestingly, while there are only two Rory originals among these selections, his commitment remained as unwavering in his interpretations of traditional and covers as throughout the rest of his career. Along those same lines, there’s no pointless playing on Live in Europe: though a couple come close, no track exceeds ten minutes

Due in large measure to the valiant and meticulous archiving efforts of his family, Rory Gallagher’s vault has been extensively but judiciously explored in the wake of his unexpected passing (even apart from the main discography issued in both 1999 and 2010). Not surprisingly, much of this assiduous work has homed in on concert content: see the various audio and video Live At Montreux titles plus the expanded package of Irish Tour ’74. Even a double-CD set ostensibly devoted to studio work, 2011’s Notes From San Francisco, contains illuminating live material. As with more recent releases like 2020’s Check Shirt Wizard: Live in 1977, the now half-century-old (but timeless) Live In Europe can function equally well as a go-to title for the Gallagher aficionados and/or a starting point for the curious dilettante.