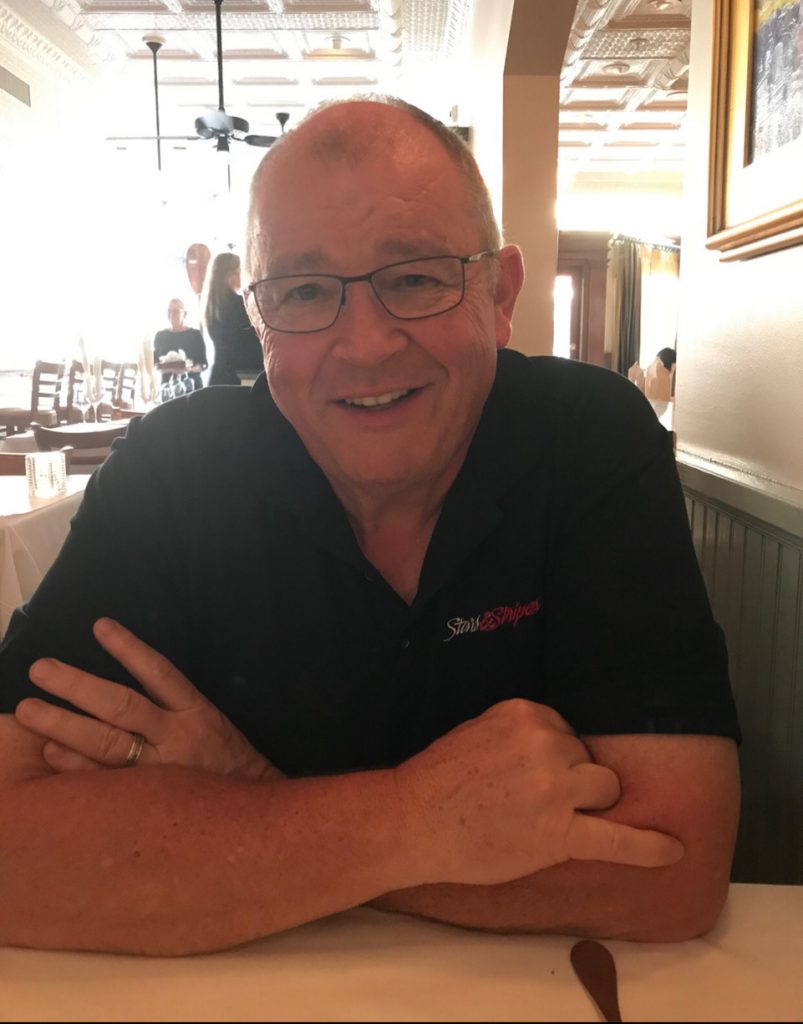 We were saddened to be informed of the passing of our great friend Patrick, in Atalanta, GA, despite his recovery from stem cell treatment a year old, Pat was hit by the Covid virus blight, which sadly gave him no chance, despite all the care and medical science available, bless him.
Pat Kennedy was a stalwart fan and a Rory champion, who successfully persevered at Fender Instruments to extend the run of the iconic Rory ’stratocaster’. For his efforts, we gave to him Rory’s spare guitar neck for Patrick’s replica, so he had a truly unique instrument.
In addition, Pat organised ‘Rory’ tribute events, in Atalanta, with the City’s Blues Society and travelled to support many other Rory tribute events.
My first encounter was meeting him at my mother’s house, in Cork, shortly after my brother had passed away, in ’95, Patrick had kindly presented my mother with a star statuette, a beautiful object that had lines from “Follow Me”, which was a terrific comfort to my mother and I.
At that time, Venus (star of love), was in full view due south, it was almost eerie, even friends were calling to say how amazing the sight was then, in addition, two smaller star like objects appeared in the sky, this was the U.S. and Russian spacecraft meeting for the first time. The following day the newspaper headline described the event as; ‘A Ladder in Space” – the healing game had begun for us.
Early this morning, just at the ‘end of the night’, I looked East and noticed the ‘morning star’ Venus shining brightly, immediately recalling Patrick’s object’s line “I Want to plant a star in the sky”.

To wife Tracey, sons Rory and Robbie our sincerest condolences, thoughts and prayers, it was an honour to have know this wonderful person.   Dónal Gallagher

Obituary:
Patrick Gerard Kennedy, 62, was called home to Heavenly Rest surrounded by his loving family on July 21, 2020.  He was born in Limerick, Ireland on January 15, 1958.  He was raised in the Village of Ballinderry, Nenagh, Co. Tipperary.  He lived an amazing life growing up in the beautiful countryside where everyone knew him as Paddy.  He loved music (Rory Gallagher),  motorcycles, cars, waterskiing, Photography and adventure.
His love of adventure and skiing took him to America where he would meet his perfect match.  Together they made plans and traveled and built the life they loved.  He represented Ireland in the World Championship for Waterskiing.  He then had a benign tumor removed from his spine and after recovery he began working for the company he would be with for 36 1/2 years, Combined Insurance Company of (Ireland) and then America.  He was very patriotic loving his home country of Ireland and then becoming a citizen in the U.S. after 9/11.  You would be hard pressed to find a more Patriotic Man.
He built a life of goals and dreams and shared his love of life with his family and friends.  To know him, you knew he did EVERYTHING with loyalty, intensity and passion.  He was all in!  If you needed something, he would be there with a helping hand, brainstorming or to give advice.
He battled Acute Lymphoblastic Leukemia (A.L.L.) since March 2019.  It was a battle he was winning and was in remission after getting a bone marrow/ stem cell transplant from his brother
John.  We all knew he would beat it – there was not a doubt.  In the end it was Covid-19 that he fought the hardest against.  We did everything possible to be safe and the wretched virus invaded our lives.
There is an immense gratitude for sharing our lives with him.  He will be deeply missed and forever in our hearts.  How do you pay tribute to such a man?  You honor his life by living every moment with deep love, gratitude, and intense devotion.  You remember him for what he did in life and the great stories he collected.  Honor him by living your Best Life and telling his stories and know you touched his life more than you will ever know!
He is survived by his wife of 36 years, Tracey Ortiz Kennedy, he was deeply proud of his sons, Rory Eoin and Robert Anthony.  His parents, John and Lucy Kennedy, brothers Liam (Sharon), John (Edel) of Ballinderry, Nenagh, Co. Tipperary, Ireland; sisters Majella (James) Smith, Mary (Liam) Butler, Birr, Co. Offaly, Ireland; and Loretta (Brian) Bolger, Dublin, Ireland.  Nieces and Nephews, Hilary, Louise, Billy, Lucy, Daniel, Luke, Ellen, Anna, David in Ireland.
Also survived by his wonderful mother-in-law, Dodie Ortiz, brothers-in-law Richard (Liz) Ortiz, Rob (Leigh) Ortiz, sister-in-law Kim (Doug) Cole, and nephews and nieces, Matthew (Gina); Brian (Dierdre) Hynson; Kevin (Jessie) Hynson, Julian Ortiz; Cami Ortiz, Emma Ortiz, Celia Ortiz, and countless Aunts, Uncles and Cousins and Amazing Friends.
Due to Covid-19 arrangements will be made at a later date.
Back
This website uses cookies to improve your experience. We'll assume you're ok with this, but you can opt-out if you wish. CustomiseACCEPT
Privacy & Cookies Policy