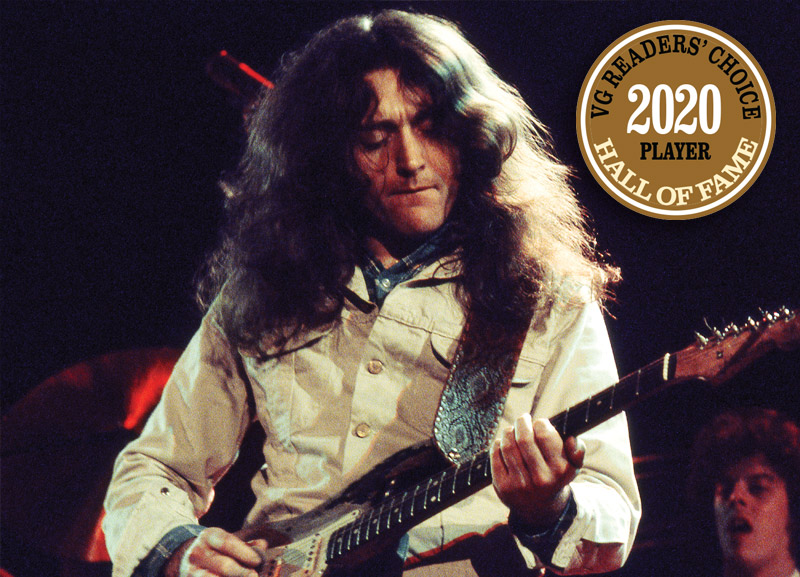 “Each year, Vintage Guitar asks fans to select Readers’ Choice winners for Player of the Year in four categories, along with Album of the Year. Included are selections for the VG Hall of Fame, which will induct three players, an innovator, and an instrument. Once again, nearly 5,000 votes were tallied online at VintageGuitar.com. Here are 2020s winners and inductees.”

(Link to full article at the bottom of the page) 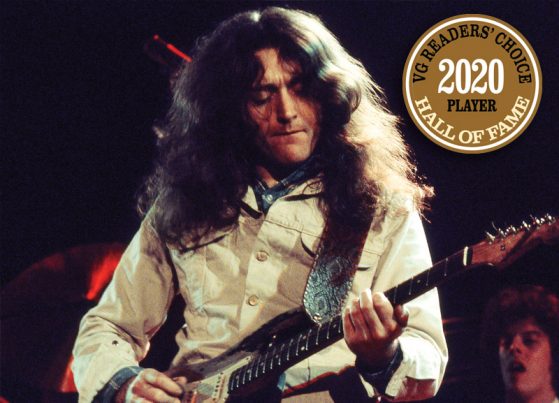 Rory Gallagher enjoyed a career renaissance in 2020, including induction to the Vintage Guitar Hall of Fame. Unfortunately, the blues-rock guitar master, singer, and songwriter has been gone for more than 25 years.

Gallagher was born in 1948 in Ballyshannon, County Donegal, Ireland. He grew up in Cork and discovered Elvis Presley and other early rockers and blues artists on the radio. He taught himself to play the guitar as well as mandolin, harmonica, and saxophone.

In 1963, Gallagher bought a used Stratocaster – his heavily worn main guitar, with most of its sunburst finish stripped away by his sweat and years of playing – on a credit plan (VG, June ’20). His first performances were as part Irish show bands, where he learned much but ultimately felt stifled, musically.

Steadily breaking free from such constraints, in 1966 he formed the blues-rock power trio Taste, which allowed him to also exhibit jazz influences, including his saxophone playing. Taste released two studio albums before disbanding in 1970.

Gallagher’s electric style incorporated stinging, blues-influenced lines with an occasional hard-rock edge. His tone was often clean, but sometimes distorted to give licks a distinctive bite. He could shred as needed, or play soulfully. His acoustic and country-blues songs dripped with the folk influences in his blood as a native Irishman. Gallagher’s slide playing – electric and acoustic – was exceptional. This mastery of styles brought guitarists the world over to the realization that they didn’t have to be one-dimensional; some of the best-known have cited Gallagher’s brilliance and influence, including Hendrix, Clapton, Page, May, Frampton, and Satriani.

Appreciation for Gallagher’s legacy swelled in late 2019, when his ’61 Strat was part of the “Play It Loud: Instruments of Rock & Roll” exhibit at the Rock & Roll Hall of Fame, in Cleveland. 2020 saw two important releases; Check Shirt Wizard – Live in ’77 – reviewed in VG July ’20 – features previously unreleased performances. The Best of Rory Gallagher (VG “Hit List,” February ’21) is a great introduction for beginners.

Gallagher was just 47 when he died after a liver transplant in 1995. Heavy drinking, a lifetime on the road (often playing 300-plus shows per year), and medication taken to overcome his fear of flying ravaged his health before taking the ultimate toll.

Sadly, he did not live to see the building recognition, respect, and record sales reaching more than 30 million worldwide. In the United States, he never achieved breakthrough mainstream success worthy of his talent. – Bret Adams