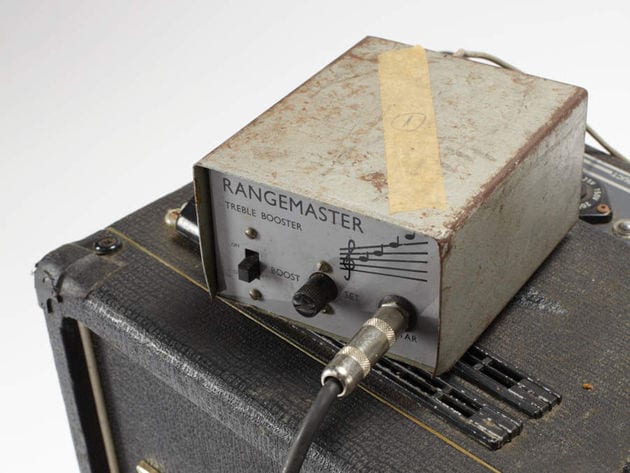 From the Taste era till the mid 1970s Rory used a Dallas Rangemaster Treble Booster with his Vox AC30 and Fender Tweed amps.

Rory his 1961 Stratocaster through a Dallas Rangemaster Treble Booster plugged into a Vox AC30 at the Musikhalle in Hamburg, Germany 1971. Photo by Heinrich Klaffs

“I found that when using the treble booster, that along with the treble boost [on a Vox AC30] you got a built-in gain, because the transistors were fairly primitive. If I used the normal input—which was very bassy, as opposed to the brilliant input—I could get that nice rough edge without getting into a very fuzzy sound. I used that for years”

Brian May of Queen was so impressed with Rory’s tone that he asked him how he sounded so good:

In the mid 1970s Rory opted for a Hawk Booster instead of the Rangemaster. These were made in New Jersey USA.

“I use them [Fender Tweed amps] with a Hawk Booster, which was made by Di Marzio before he got into the pick-up business.”

“I use a Hawk booster through that just to roughen it up a bit.”